Because of work trips and other general busyness, I fell behind on virtually every comics series I was buying, which then impeded my ability to get back on a weekly schedule. These Non-Doomino Effect entries will be an attempt to chip away at the stack so I can get back to the normal routine. Up next, DCeased 1-4.

I used to be sort of indifferent to it, but then there was that phase in the 2000s where Marvel zombified everything, and it just let me to hate the stuff. So I have honestly no idea why I even took a chance on DCeased. Maybe it was a slow week? 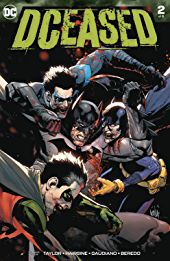 But I’m loving DCeased. For the uninitiated, DC’s take on zombies is based on the idea that the anti-life equation is unleashed on humanity, and it spreads through blood and screens. Funny enough, I also tend to really hate things related to Darkseid and the New Gods. Maybe these things are canceling each other out?

I’ve honestly been giving some thought to why on earth I am enjoying this, in spite of my previously stated inclinations against precisely the things this story is about, and I suspect that it’s all about the underlying hope in this series. Don’t get me wrong — this is as bleak, terrifying and gut-wrenching as you would expect from a zombie story, as loved ones turn, families are torn apart, and lives are irrevocably changed by tragic moments.

But there’s an underlying “Ok, things are terrible — so what are we going to do about it?” that propels the story forward and that I find engaging.

I don’t want to get too spoilery on this, but if you’re like me and find yourself typically staying away from a genre that seemed tired 10-15 years ago, this is a surprisingly fun series so far.

One Response to Non-Doomino Effect: DCeased 1-4