Now it may seem as if the streak ended, and technically it did, but I only bought one comic the week before this last one, and considering the entire gimmick of this review column is the ragged segue from one issue to another, you can’t exactly have a segue when there’s only one thing to talk about. So I saved last week’s issue for this week. 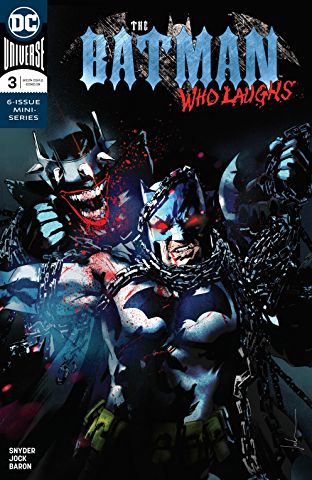 So we’ll start with last week’s lone issue, The Batman Who Laughs #3, the mini-series spin-off from Dark Knights: Metal. I have two things I really like about this series and one thing I don’t.

Good thing 1: This series is essentially Batman vs. Batman, and even though there have been a number of iterations of that over the years, I don’t really get tired of them—provided the premise is around the challenge of catching up with someone who is always one (or more) steps ahead, simply by virtue of being the same guy with all the same strengths and usually freed from some of the constraints that our Bruce imposes upon himself.

Good thing 2: Scott Snyder’s skills with setting the horror mood are perfectly suited to a story like this. Nice Batman can’t keep up, can’t keep from falling further behind, and now can’t stop himself from slipping further into the Joker’s seemingly inescapable trap. That’s bad! Scott Snyder is made for that stuff.

But the thing I don’t care for is how Snyder has turned the Joker into this weird invincible metahuman. END_OF_DOCUMENT_TOKEN_TO_BE_REPLACED

WWE put the worst elements of their booking on display last night, and the bright spots even managed to prove the rule.

Elimination Chamber was symptomatic of a bloated creative team that hides its lack of good ideas in overwhelming volume—overwriting the simplest and most compelling elements of what makes competition resonate with people.

Inexplicably this match turned into a two-on-one match, presumably because someone who doesn’t understand how sports or competitions works thought Finn Balor would look more sympathetic and more impressive going against the odds in this way. But this is the point of view of a moron, because implicit in these two-on-one rules is that Balor can (and did) win the title by pinning either member of the two-person team, even though only one member was the defending champion.

So WWE expects this to be a significant moment when Balor wins the Intercontinental Championship — which he does by pinning the defending champion’s hype man. Balor wins the title by not defeating the champion. How is that supposed to get him over? How is that supposed to feel satisfying? Right away, he’s undermined by booking that routinely broadcasts its own lack of awareness of how athletic competitions work and why they resonate with audiences. END_OF_DOCUMENT_TOKEN_TO_BE_REPLACED 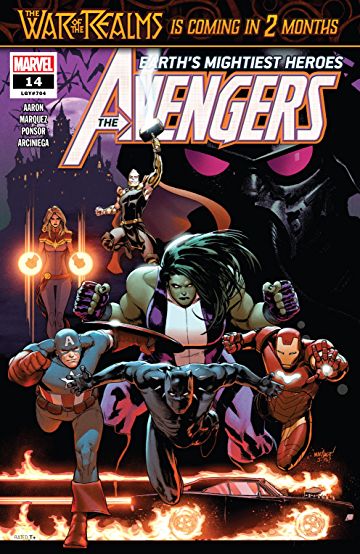 Let’s kick off this week’s reviews with Avengers #14, which resumes the vampire storyline that was randomly dropped in favor of the Iron Fist origin story last issue.

There’s apparently a vampire civil war going on, with a bunch of anti-Dracula vampires attacking Dracula’s castle, and Blade is in the middle of it trying to stop the anti-Dracula vampires, led by a guy called Shadow Colonel. In a scene that is basically just the “Joker gets arrested on purpose” scene from The Dark Knight, the Shadow Colonel is deliberately taken into custody by the Avengers so that he and his evil buddies can be on the inside and start causing problems with folks like Blade and Ghost Rider.

“He’s far too confident,” Black Panther says. “It would appear the Shadow Colonel wanted to be here.”

There’s something really kind of stupid about all of this, yet I find myself being uncharacteristically patient. END_OF_DOCUMENT_TOKEN_TO_BE_REPLACED

To paraphrase John Mulaney, I know it’s kind of stupid to complain about a movie that came out 14 years ago, but I wasn’t a blogger back then, so I have to do it now.

The scene in question is the audience’s introduction to The Batman.

I’m coming in hot on this one. Let’s just dive right into it.
END_OF_DOCUMENT_TOKEN_TO_BE_REPLACED 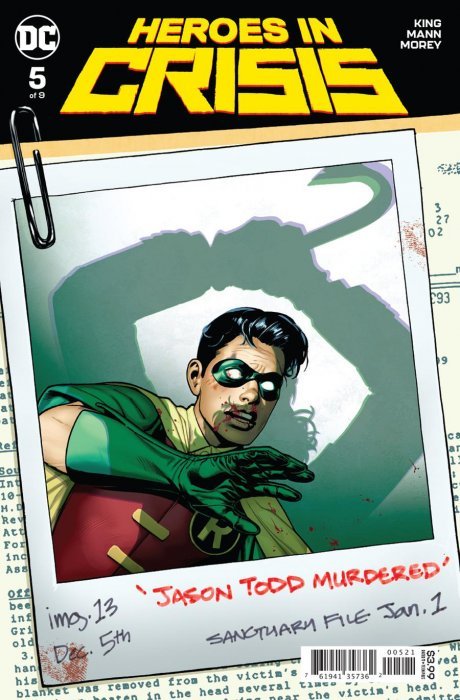 Starting off this week’s reviews is Heroes in Crisis #5, and we are now at the section of the mystery where you slosh through the dull middle-part, hoping something is going to happen soon. I for one was getting tired of the formula of “See-saw between Crazy Booster and Crazy Harley with testimonials from now-dead heroes littered throughout.”

While I enjoyed this issue more than I didn’t, there were a number of characterization choices that kind of caught me off-guard.

I don’t find Harley Quinn sexy, because she is a cartoon character and I’m not someone who turns to drawings of tightly clad women in comic books to satisfy my adolescent lust, and so prurient splash pages designed to show off the shape of her hips and breasts just feels beneath the level of storytelling that Tom King appears to be going for. There’s nothing wrong with sexuality in comics, of course, but this just feels like “Hey thirteen year old, need a little time to yourself?”

That said, this is the second issue in a row to go down this odd path, so maybe it’s not really “out of character” anymore. I don’t find Harley Quinn charming, because I don’t think “Kooky homicidal person” is any more interesting than it was in the 90s when those characters were a dime-a-dozen. Same reason I find Sanity to be probably the worst act in professional wrestling. And I honestly never realized that Batgirl spoke in nonsense like Harley does. So I really don’t find the Harley half of this plot at all engaging.

On the flipside, I used to enjoy Booster Gold, and I loved the Blue Beetle. But I find their arc in this story incredibly off-putting. Ted was such a conscientious character; I feel like they’re halfway there with his loyalty to Booster, but his nonchalance in the gravity of this situation just feels misaligned to what made the character endearing in the first place.

I mean look at this opening spread — it’s beautifully rendered (and I admit I didn’t see the “Heroes In Crisis” letters until zooming out to this degree) but a bunch of heroes have just been brutally murdered and the casual nature of this just feels jarring. 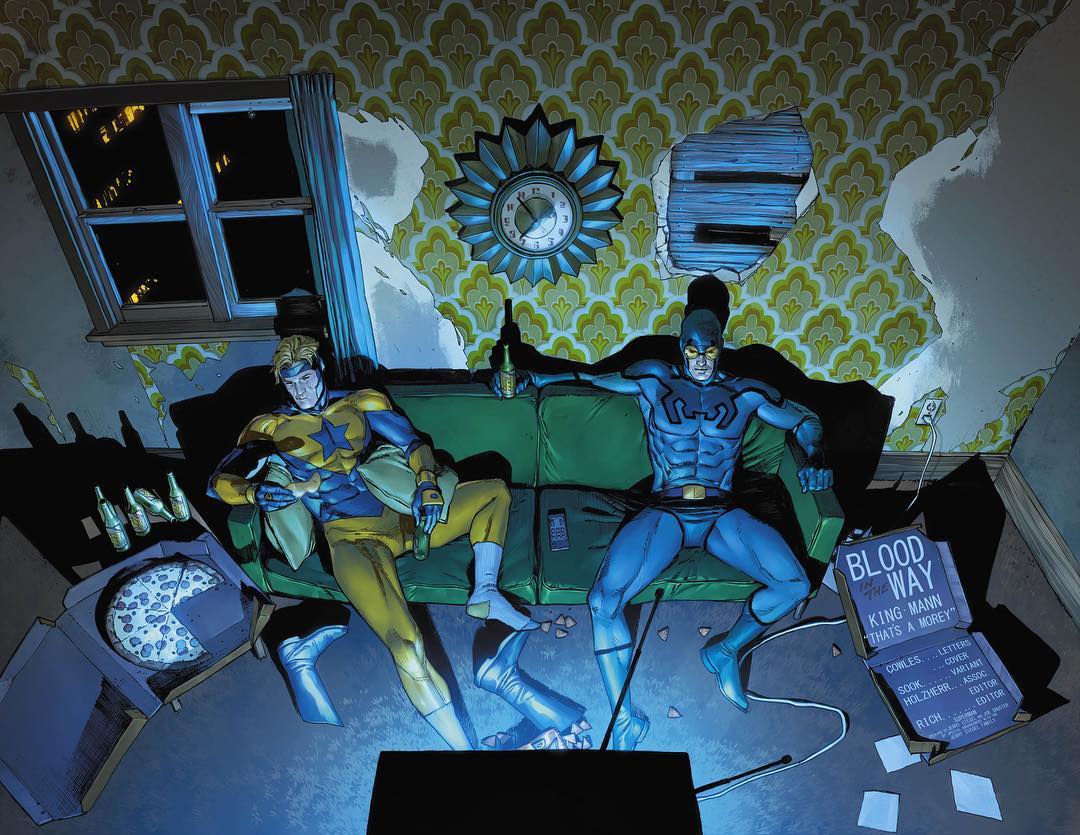 And the real tire-screecher in this issue was Superman’s speech. END_OF_DOCUMENT_TOKEN_TO_BE_REPLACED