Theory: Loki is the Main Villain in Avengers: Endgame

This morning, I posted a rather brilliant (IMO) theory about how Loki is still alive in Avengers: Infinity War, posing as his brother Thor ever since Thanos destroyed their Asgardian ship at the start of the film.

While writing that theory out, I merely wanted to make a case for Loki faking his death somehow at the start of the film and masquerading throughout the rest of it as his brother.

But I stopped short of theorizing on any of the main details of his Master Plan.

So let’s do that now:

Loki is the ultimate villain in the Marvel Cinematic Universe, and he’s been using Thanos since the first Avengers movie to collect the Infinity Stones on his behalf, so that he can exact his revenge on The Avengers and rule the entire universe.

While I like the character of Thanos, and I appreciate how much work Marvel spent trying to build him up as their main Big Bad, he’s still nowhere near as villainous as Loki.

Thanos has a relatively well thought-out plan (if you ignore the fact his “snap” could just double the amount of resources rather than removing half of the population consuming those resources, if that’s really what he’s so worried about), but he’s not altogether evil.

He seems to have the greater good in mind, which makes for a sympathetic bad guy, but there’s no room for subtlety or nuance in a movie featuring talking raccoons and flying wizards.

What Endgame needs is a villain worthy of all this buildup. They need a mustache-twirler. They need somebody who not only bested all of the Avengers physically, but who outsmarted them, as well.

In other words, they need Loki.

Let’s go back in time and examine a few clues.

Remember the first time we met Thanos, at the end of the original Avengers film? Remember how he turned to the camera and his eyes glowed blue? 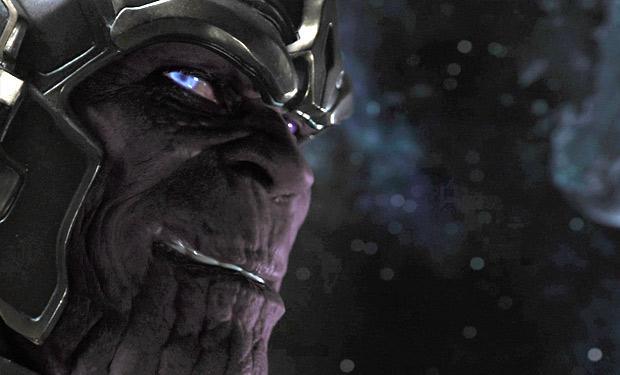 That was weird, wasn’t it? Especially since Thanos doesn’t have blue eyes?

Now, granted, maybe they updated the character design (they re-cast him, after all) and decided to drop the blue eyes, for whatever reason.

If you recall, whenever Loki tapped one of his enemies with his scepter in that film, their eyes glowed blue and they started following his commands.

What if Thanos has been under Loki’s mind control ever since then?

It would certainly explain why Thanos didn’t immediately come after him once Loki’s plan failed and the Chitauri were destroyed in that fight in New York.

So all this time, while Loki has been scheming around with his brother and trying to get himself out of various hot water situations, he’s been using Thanos to collect the Infinity Stones on his behalf.

Perhaps that’s why, in my theory I posted this morning, “Thor” (that is, Loki posing as Thor) doesn’t seem intent on preventing Thanos from getting any more Stones by traveling to Knowhere with the Guardians.

What point would there be, if Thanos is eventually going to hand them over to him anyway?

Maybe it’s not that simple, though.

Maybe the mind control has worn off by now, which Loki plainly sees at the start of Infinity War, so now he has to craft himself a new weapon and go tie up that loose end by killing Thanos and taking the Gauntlet, hence the Thor disguise.

There are several possibilities here, but they all point to Loki eventually getting the drop on Thanos and stealing the Infinity Gauntlet for himself.

But where does that leave us? What’s the Endgame?

Well, let me ask you, do you think it’s a coincidence that all six of the original Avengers are left alive after the snap (except for maybe the real Thor, who’s MIA)?

Loki is going to eventually steal the Infinity Gauntlet from Thanos and use it to exact his revenge on the original team that defeated and humiliated him in New York.

He made one critical flaw, however: He underestimated Nick Fury.

Not only did he not include him in his big revenge scheme – not thinking him important enough to waste his time on – he also didn’t take care of Fury personally, instead allowing him to disappear in the snap.

In so doing, he left open the possibility for Fury to bust out his cosmic pager and shoot off an S.O.S. to Captain Marvel, who will bring this entire plan crashing down around Loki’s head.

I seriously have no idea if there’s anything to any of this theory. I’m 100% basing it around one throwaway line of likely improvised dialogue that doesn’t make any sense.

2 Responses to Theory: Loki is the Main Villain in Avengers: Endgame