Cap Lives: This Is Obviously Not A Spoiler

Cap Lives: This Is Obviously Not A Spoiler

It wasn’t that long ago that Marvel cinched some great press from the likes of ABC and (if I recall) CNN when they killed off their star-spangled hero. While Wolverine’s popularity easily eclipses any of Marvel’s other heroes in their collection, and Spider-Man is more of a flagship than the flag-bearer himself, Captain America’s demise seemed to garner a decent bit of mainstream attention, if perhaps because of the highly politicized climate, pre-election.

On the fanboy side, while his death was met with considerable interest, it also came with an equal heaping of skepticism. After all, this couldn’t be any more than a gimmick; just a sales boost. “Of course he’s not going to stay dead. Of course they’ll bring him back to life, eventually. What kind of suckers does Marvel take us for?” And, sure enough, a couple years later, here he comes, and the fanboys are storming the shores of The United States of Marvel once again. “Oh, like we didn’t see that coming. This isn’t a surprise.”

My favorite comment went something like: “Nothing surprises me anymore, ever since they brought back Bucky.” Aw, you poor jaded thing. Or maybe naive is the better word. END_OF_DOCUMENT_TOKEN_TO_BE_REPLACED

DC comics is expanding their Vertigo imprint with an imprint of its own. I caught wind of Vertigo Noir in this month’s Previews, and I must admit to being slightly curious. Vertigo is more or less the only DC stuff I’ve ever picked up, and as I’ve posted before, I loves me some crime stories.

I don’t have the magazine in front of me at the moment, and I can’t find an iota of information on the new line anywhere on the internet, but of the two books, one of them is being written by Brian Azzarello, who just so happens to have a time slot open with the conclusion of that other noir book he was writing for Vertigo this week.

With the last trade paperback of 100 Bullets being rushed into stores, and now the opening of this new line, DC will be sitting pretty on a pile of casings and cornering the black market of crime tales. At least, until Ed Brubaker gets to work on the next issue of Criminal.

Posted in books of doom, reviews by Doom Fritter

The thing about Nick Fury is that he always works better when he’s lurking around in the background. The trouble with that, however, is that it makes him an incredibly compelling character; one that you would like to see more of.

Fury is a character that’s built to fill in holes, smooth over rough patches, and advance the plot. He has access to a super-intelligent network that can pretty much figure out anything and everything (except, of course, that which the protagonist seeks). He is the hero’s best friend. He has all the right answers, and he always knows what to do next. So Fury is a real badass who’s handy in a pinch.

Unfortunately, that’s about the only time he’s handy. The rest of the time, he’s apparently caught up in the drama of playing father-figure to the amateurs around him, and slogging through failed relationships. That’s the kind of stuff we don’t want to see Fury involved with. When something goes wrong, he says “I’m on it,” disappears, and gets to work getting his hands dirty. He doesn’t get told off by children and the go somewhere to sulk; it’s just not becoming of this jack-of-all-trades.

Even if the writing were better, Fury’s “solo” adventures would still lose that trademark Fury appeal, because suddenly he’s yanked out of the shadows and, in the light, his flaws are exposed. He can’t afford to have his flaws exposed.

I’m responsible for the Book of Doom this week, and as all three of my regular titles came out last week, I’ll be venturing into somewhat new territory, here. While I was really curious about the comics adaptation of Pride & Prejudice, and while Doominator tried to vicariously spite my fellow Doomers and having me choose the Franklin Richards April Fools issue, I ended up choosing a Nick Fury book, Secret Warriors #3. It’s not necessarily a good jumping-on point, but it’s the closest thing to something interesting to me.

The most talked-about new Marvel series continues as HYDRA’s plans pick up speed while more remnants of S.H.I.E.L.D. fall. Nick Fury reconnects with an old colleague and finds out that the balance has shifted between him and some of his former soldiers. All that, and the Warriors suffer their first casualty of war.
Rated T+ …$2.99

Join me this weekend, won’t you?

While Diggle doesn’t mention Morgan’s role, it seems likely that he’d take on the role of Max, the series’s enigmatic villain (pictured), though I could see him as Clay, the Harrison-Ford–style team leader, too. Either way, as a fan of The Losers, and now a fan of a Morgan, it’s more than reason enough to start getting excited about the intense, politically-tinged action-thriller.

So you’ve seen the Watchmen movie, and maybe you liked it, and maybe you’ve read the graphic novel, and you surely liked that. But where do we go from here? DC is certainly on the ball with their “After Watchmen” recommendations, offering up a plethora of choices to suit your fancy. Whether you liked the superheroes, the mature take on the genre, the doomsday scenario, or the political atmosphere, there are a lot of books out there to keep up the pace.

This week I’m going to recommend DMZ, by Brian Wood and Ricardo Burchielli, which is already part of DC’s master plan, anyway. DMZ is a mature comic with intelligent commentary, clever writing, and a rock solid world. That last part is the keystone that holds everything else together.

World-building is important in stories, and one could argue that both Marvel’s and DC’s success in the 1960s hinged on the fact that their characters lived in the same world; that the characters live in a reality that feels as real as the one you’re living in now, but it was different and intruiging. (At the very least, both companies have assuredly taken advantage of the intertwining story potential in the last few years.)

All of my favorite movies and books have built up engrossing worlds around the characters and stories. END_OF_DOCUMENT_TOKEN_TO_BE_REPLACED 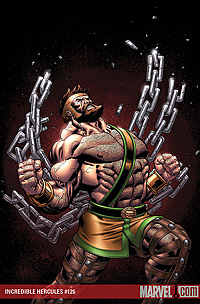 The Incredible Hercules is one of my favorite books out right now, and I was hoping this “jumping on” point would be the best opportunity for the series to do all the talking for me. As I write this, I haven’t heard the reaction from the others, but I doubt I’ll have succeeded in proving my point. It wasn’t a bad issue, necessarily, it was just rather substandard. And for $4?

Hercules #126 was pretty segmented. His origin story took place in ancient, in-continuity Greece, followed by a catch-up piece for any new readers this book is hoping to pick up, and finished out with a light-hearted, but still moving, story of Amadeus Cho’s search for his lost pup.

It’s segmented in more than just story, however, and while the writing team showcases their diversity by bringing in Planet Hulk-style action, and Hercules-style humor, it’s too bad they couldn’t mix them together a bit more evenly. I’m not completely turned off by action comics these days, but they’re so much smarter when they pepper in a bit of smirking wit. B.C.-period writing tends to get a bit heavy-handed as it is.

So we’ve got his origin, which, as you would expect from a warrior god-halfling, is full of posturing, honor, and performance. On the other side we’ve got the super-intelligent Cho trying to unearth the whereabouts of the coyote pup he lost somewhere between World War Hulk and Secret Invasion. And hello, look guys, it’s the Hulk! Remember him from back when he still owned this book? Yeah, those were good times (and yeah, I’m still bitter, Marvel). In the middle is the series recap, which dryly parses Herc’s early Marvel appearances, and then divulges the details of a lot of recent events, including World War Hulk, Secret Invasion, and other spin-offs and universe-wide events—yawn. END_OF_DOCUMENT_TOKEN_TO_BE_REPLACED

I mentioned, not long ago, my unexpected love for The Incredible Hercules (purely hetero *cough*), and along with it I mentioned that I probably won’t be able to actually convince anybody to pick it up, so what better way to force people to read something than by making it my pick for this week’s Book of Doom:

Proudly presenting, for the first time in Marvel continuity… the origin of Hercules! How did the young man who becomes the Lion of Olympus learn of his divine heritage? In what battle did he earn the title “Prince of Power?” And, most importantly, why does the goddess Hera hate him so, now that her Dark Reign begins to fall across New Olympus?

It claims to be a good jumping-on point, and is also a double-sized issue, so hopefully we—the creators and I—will have ample opportunity to convince you that it’s worth keeping in the pull-box.

Posted in library of doom, reviews by Doom Fritter 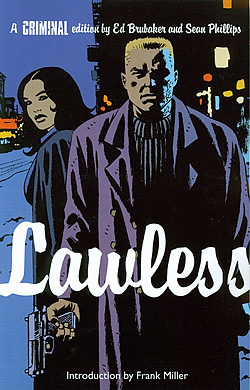 I know other Doomkopfers have already praised Criminal up and down in the 2008 year-in review (2007, too), but I’m new here, and feel like I ought to send another good word to the creative team. It’s the kind of book that was written just for me. My first experience with writer Ed Brubaker was on his continuing run on Captain America, the first post-2000 take on the character that was actually any good. When I found out he was starting some creator-owned series I was interested, and when I found out it was called “Criminal”, I was a guaranteed buyer. I love the cop & criminal genres: detective stories, film noir, heists. They’re 20th century westerns. A battle between the black hats and the white hats, only their roles are so often interchanged.

Anyway, Brubaker is built for stories like these. END_OF_DOCUMENT_TOKEN_TO_BE_REPLACED

Winking Back at Hercules 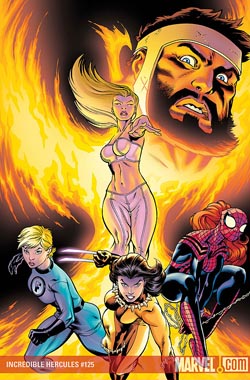 I imagine it’s probably a futile effort to convince anyone to start picking up Hercules.

That’s probably why Marvel tricked me into subscribing to the book. But, I continue to subscribe because, damn! it’s the funniest funny book I’ve ever read.

Picking up Hercules, initially, feels a lot like getting one of those men’s bodybuilding magazines. For someone with a pre-Cap Steve Rogers frame like me, it especially feels like I’m trying to compensate for something. I mean, here’s Herc, bare-chested, hairy, and enormous. And he wears a skirt that sometimes, depending on the angle, comes a bit too close to exposing his mythic peen.

Marvel annoyingly—and perhaps wisely—transitioned The Incredible Hulk title into The Incredible Hercules, shortly after the Grecian’s appearance in “World War Hulk”. I’m not sure why, exactly; I don’t know that there was a lot of previous demand for Herc to have a solo title. All I can assume is they wanted Hulk to have a new title, with a new #1, that the character isn’t strong enough to support multiple ongoing titles, and the company wanted to milk suckers like me who didn’t realize the changeover would last quite a bit longer than temporary. END_OF_DOCUMENT_TOKEN_TO_BE_REPLACED