Who the hell is Angela, and why should I care? 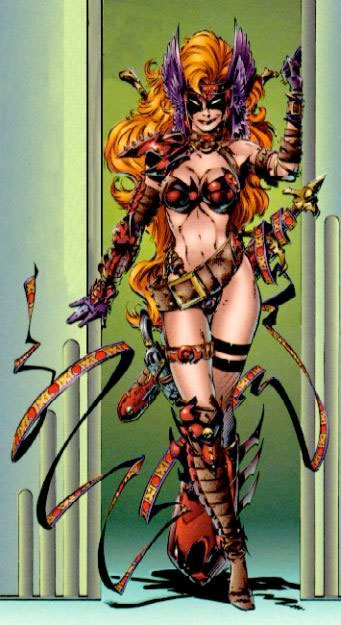 When was the last time anyone cared about Spawn? Was it when that terrible movie came out? How about when that terrible animated series was around. Or when the “action” figures were all the rage? Spawn was at the forefront of everything that went wrong with comics in the 90s: too grim, too gritty, spikes and capes up the wazoo, bad art and even worse writing. I mean, the only thing worse about the 90s was that whole “Bad Girl” craze with Vampirella, Lady Death and the like, right? If only there was some way they could have combined the two into one character that epitomized the worst that comic books had to offer two decades ago…

Oh wait, they did. Her name was Angela. And now for some god awful reason she’s part of the Marvel Universe.

Or at least she will be by June. Angela is going to make an appearance in Age of Ultron, and it looks like she might be here to stay. According to newsarama.com, “the appearance of Angela will be at the end of the series, with editor-in-chief Axel Alonso likening her appearance to the post-credits scenes at the end of Marvel Studios films.” Apparently Mr. Alonso isn’t quite aware that the appeal of those surprise appearances at the end of Marvel movies is that they’re SURPRISE APPEARANCES. There’s no such thing as a Thanos superfan, but when Thanos showed up at the end of Avengers without notice, every fanboy in the theater creamed his pants because they weren’t expecting it.

It was pretty newsworthy when Invincible made a guest appearance in Marvel Team-Up a few years back. A character from a different company had never shown up in an honest-to-goodness Marvel 616 continuity comic before, and Invincible was one of the most popular characters at Image at the time. But Angela hasn’t been relevant for well over a decade. When was the last time she was even in a comic book? Have you ever read a comic she was in? Would you have read it if you weren’t a hormonal 15 year old boy at the time? [In case you are wondering, the answers are 2000, no, and girls don’t do it for me like that]

So why is it a big deal that Angela is coming to the Marvel Universe? Spawn was massively popular when Image first started, but hasn’t been a major player in the comic book world since the movie flopped at the box office in 1997. It hasn’t even cracked the top 100 in years. Angela was probably more popular than Spawn when she first debuted, but that’s just because teenage boys like exaggerated tits. Those teenage boys are now 30 year old men, and they now have instant access to limitless pornography on the internet. Some of them even have access to actual boobies attached to their actual wives or girlfriends. What appeal do cartoon breasts have to them now?

So hooray! A one-note character that you vaguely remember from your adolescence is coming back to comics! Why should we care?

2 Responses to Who the hell is Angela, and why should I care?