I forgot to do this column for the past 200 or so weeks, and I tried several new series this week, so let’s get back into it, shall we? 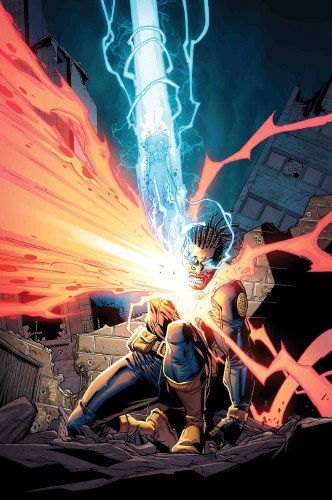 We’ll start with Uncanny X-Men #8. It’s really hard to make a quality weekly comic book, and Uncanny X-Men is sure doing its best to prove the rule. Doominator dropped in a few weeks ago to share some thoughts on the series, but my general feelings tend to be “This is the kind of mess I’d expect from the Chuck Austen era, and not any kind of grand return of the team worthy of a restart to the numbering.”

One of the drawbacks of doing a weekly series is that it’s nigh impossible to have consistent art. And for me, inconsistent art styles equate to basically the storytelling equivalent of watching a movie and suddenly everyone is speaking in a different accent.

On top of that, the story really revolves around the petulance of four X-Men understudies, validating the fact that they’re treated like kids by acting like kids. It also ties into the Age of Apocalypse storyline from the 90s, which essentially every surviving homer blog tries to convince you was good, but was actually terrible.

So you’ve got this all-star crew of reunited X-Men, and the story focuses on some D-listers. Magneto is playing a marginalized supporting role. Apocalypse is in this story in order to spend the majority of it tied to a chair (though he is actually out walking around in this issue). I keep reading in the solicitations that after this storyline, Wolverine and Cyclops have to clean up after the decimation of the X-Men, and I’m like “sweet.” 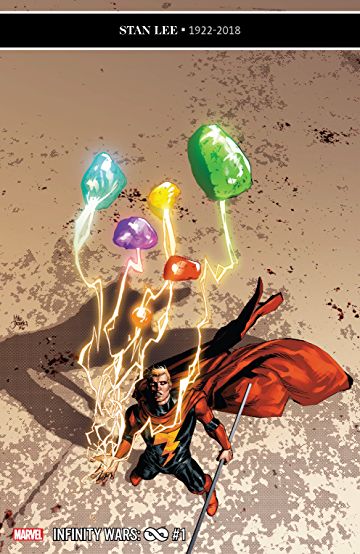 Speaking of cleaning up messes upon conclusion of cataclysmic stories, that leads me to Infinity Wars (infinity symbol) #1. I enjoyed a lot of the recent Infinity Wars story, but the last few issues—while entertaining—really just felt like utilitarian setups for spin-offs. There’s such a low-hanging joke about the cyclical nature of infinity-gem-related stories that I’m consciously avoiding even approaching it.

I have such a soft spot for the 00s Guardians of the Galaxy series that I approach anything in this vein with an open heart and turned-off mind, and this issue was junk in an endearingly 90s way. It all just had this feel of earnestly trying to be profound, but failing in a way that you can’t help but admire like some nerd kid who gets a really slow pitch because the jocks feel sorry for him, yet he still can’t hit the ball. That’s Infinity Wars (infinity symbol) #1, and we’re all cheering for it, but none of us want it on our team.

First there’s the fact that they dug up Mark Bagley to illustrate the thing, and that man can adhere to a style in a way that disproves evolution more than a Bible and Kevin Sorbo combined. There’s the adorably dressed raptor people with their flop hairdos, capes and fur collars looking straight out of some Jim Valentino Image comic from 1994. And the goofy sub-plot of the condemned inmate who ends up with the time stone, freezing people on his way out the door to freedom. If this comic had a head, you’d want to give it a gentle rub and say “way to go, champ!” Who knows where that time-stone guy is going? If you find out, you don’t need to tell me. 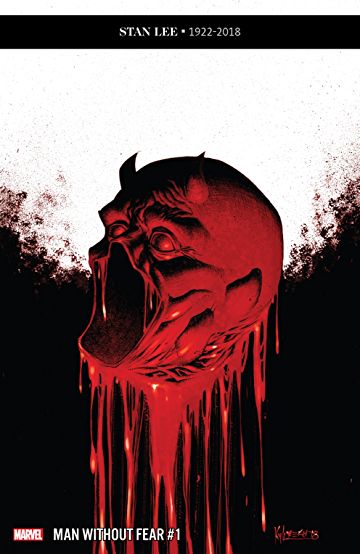 Speaking of cruel manipulations of time that lead people to question their experiences, that leads me to Man Without Fear #1. Following the “Death of Daredevil” storyline that closed out the regular series, Marvel has a new miniseries that will take us in places that I’ll never know, because there’s no way I’m buying issue #2.

For those who stuck with Daredevil throughout the “Death of Daredevil,” it turned out the entire final arc (SPOILERS) was all just Daredevil battling Daredevil in Matt Murdock’s mind as he was in a coma. Like that was the final few issues—Daredevil running from or attempting to survive this frightening larger-than-life nemesis who was actually Daredevil, and it was all in his mind as his body fought to survive.

So what is Man Without Fear #1? It is literally Daredevil fighting and/or running from a spooky larger-than-life version of Daredevil while trapped in his coma dream as Matt Murdock fights to survive his coma. We literally just went through this in a different series! Do people at Marvel not talk? You’d think Jed MacKay (writer of Man Without Fear #1) might’ve asked Charles Soule (writer of “Death of Daredevil”), or at least their editor (not looking that up), “Hey, since I’m writing the series that follows ‘Death of Daredevil,’ how does that wrap up?”

I have to imagine that he never asked that, because if they told him how “Death of Daredevil” wrapped up, I can’t imagine he would’ve thought “Ooh I’ll do that too.” People might notice! Or at least people who aren’t the editors at Marvel might notice, I guess.

For long-time readers of this blog, I pretty much credit Daredevil with why I got back into comics in 2002. Some friends told me it was really good, and I was like “That dorky guy?” So I’m really fond of Daredevil, and I’ve stuck with this character for the past 17 years. But I have to say, I was kind of happy to see that there was a “Death of Daredevil” storyline coming up. I think Daredevil could die, and the Marvel Universe would be ok. Like give him a good, proper death that really sticks. Make it really mean something. Let people mourn—as they should, because he is awesome. But just let it rest. 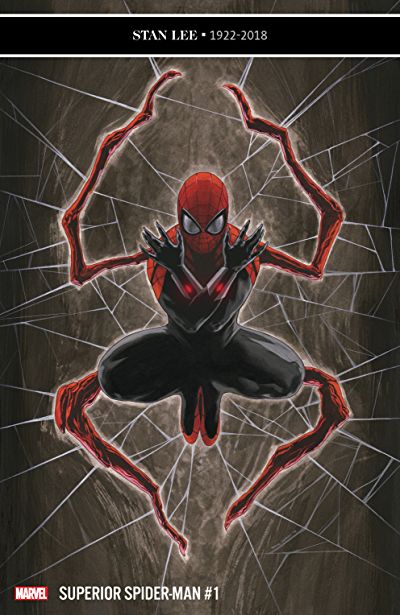 Speaking of consciousness trapped inside a dying body, that leads me to Superior Spider-Man #1. As I was reading this issue, I was trying to put into words for myself why I enjoy this character so much, and then I realized – the world is so full of anti-heroes that are basically unleashed id – the Punisher, Wolverine, Lobo, Deadpool. That’s not only easy to do, but it’s sort of creepy the way those characters sometimes seem to play out unsettling power fantasies.

Superior Spider-Man, on the other hand, is the anti-hero of the unleashed superego, and that’s a lot more interesting! Maybe it’s just because I have power fantasies of unleashing my ego, but I have yet to tire of Dr. Octopus’ internal monologues and external explanations of how stupid Spider-Man and most heroes are for failing to figure out how to be a superhero like he has. I have to be honest—I don’t even really remember what happened in this issue! I was just having so much fun reading it. 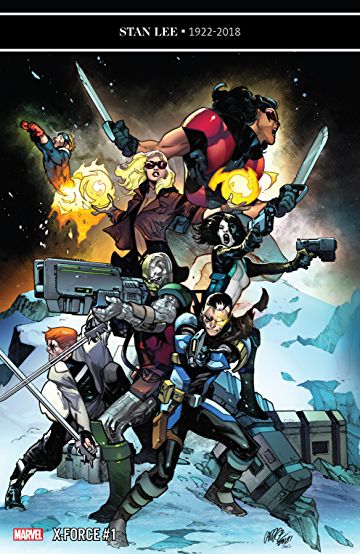 Speaking of unleashed id, that leads me to X-Force #1, which—now that I think about it—was the whole reason I started thinking about Superior Spider-Man in those terms. I had hoped I was going to enjoy this book, both for sentimental reasons (harkening back to when I was a kid and thought stupid books like X-Force were cool) and because I loved the Pepe Larraz cover! Turns out, I was stupid as a kid and interior artist Dylan Burnett is not Pepe Larraz.

I actually have nothing at all against Dylan Burnett’s art in isolation, but Ed Brisson is clearly trying to play up the “fun” part of bloodlust, ranging from the crippling kind to the lethal kind, and Burnett’s “zoinks!” illustration style (if you’re looking for someone to extract the natural humor out of a bullet emptying someone’s skull, Dylan’s your guy) only accentuates the worst of that tone. This is pandering to a stunted male adolescent audience, and I’m happy to report that when I was 14, my growth spurt made me one of the tallest kids in class. 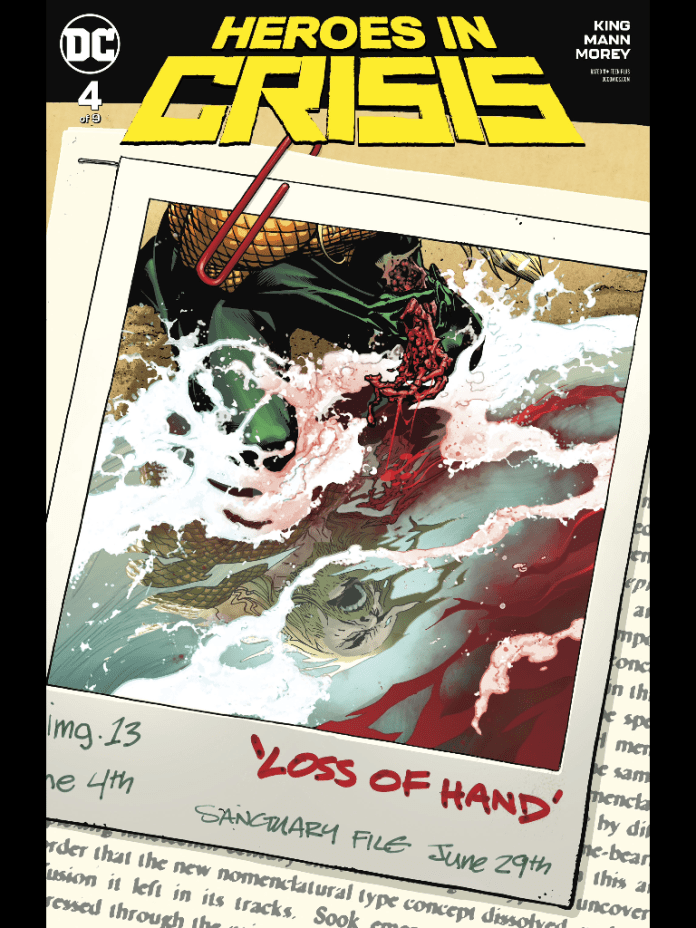 Speaking of more mature ways of dealing with the lethal side of being a superhero, that leads me to Heroes in Crisis #4. Not a lot of books have turned my stomach the way the first issue of this series did; Tom King is an amazing storyteller, and this series has been a gut punch in all the right ways.

That aside, this is a fascinating story, and I have high hopes for where it’s heading, so I give it the benefit of the doubt. But the Watchmen allusion at the end of the issue makes me worry that this is only tied into that Geoff Johns turd, and rather than having regular DC universe implications, instead only has “set up the dumb thing” implications.

Even though most of these series won’t be in my buy pile next time around, hopefully I’ll be back before 2023!