The expression on Superman’s face at the beginning of the trailer for Dawn of Justice really sums up the tone:

“I don’t have time to explain to these stupid people how lucky they are that I’m clumsily destroying their city.

I’ll admit that this trailer made me more excited for the movie than I had been. The previous trailer looked as if Zack Snyder was just redoing Watchmen, only this time with more valuable intellectual properties. Almost entirely thanks to how great Ben Affleck appears to be playing Batman, I’m significantly more excited — but not without skepticism.

I hated Man of Steel. I thought it was a terrible movie that made no sense as a Superman movie.

“If you want to make that movie,” I thought to myself and said out loud to anyone who would listen, “why make a Superman movie?”

Snyder recently told Entertainment Weekly that the destruction in Man of Steel was always part of the point — that there would be consequences for what happened.

Barring anything short of leaked emails from screenwriting discussions before the production of Man of Steel, I would be willing to guarantee you Zack Snyder is lying.

And the main piece of evidence is the movie he made.

Half the city is laid waste, and what does Superman do? He stops to make out with Lois Lane.

There is absolutely zero acknowledgment of the consequences amid the damage. Absolutely none! Snyder has gone on to say that the “thesis of Superman” is “that you can’t just have superheroes knock around and have there be no consequences.”

Beyond the point that WHEN HAS THAT EVER BEEN THE THESIS OF SUPERMAN? (which supports the idea that Zack Snyder was not setting out to make a Superman movie, but an indulgent Zack Snyder movie using DC’s properties) that theme was not reflected in Man of Steel at all.

Snyder’s defenses betray an exasperation — “I don’t have time to explain to these stupid people how lucky they are that I’m making epic films for them.”

And I’m afraid that explains what we see in this trailer.

Given the fact that there is absolutely no evidence for Snyder’s claim in the film he made, his defenses come off as baseless rationalizations. He has to pretend this was what it was all about to begin with.

And now he’s made a movie to bring those rationalizations to life.

The theme of this trailer is clearly that Superman is a benevolent godlike creature who is here to save us in spite of ourselves. Whether it’s our rash and cruel judgment (Batman) or our cynical fear (Luthor) only we as humans can really deny ourselves the salvation we desire.

The symbolism reflecting Snyder’s disingenuous quest to legitimize his blockbuster blunder suffering under the knife of jealous critics and insecure fanboys is a little creepy.

I really hope I’m wrong about this. Visually, Dawn of Justice looks like it’s going to be exciting. And I am fully aware of the fact that you can’t judge a movie based on a selectively edited trailer. 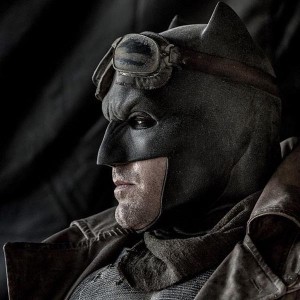 And I hope that’s the case! Because when you peel back the spectacle and step back and look at this, what do you have?

A contemptible Superman who offers audiences absolutely nothing to sympathize with.

A Batman who appears set up to be a rage-fueled madman hellbent on crippling Superman for no real reason.

Humanity, through the form of the masses and the politicians, who appear to desire nothing more than to be led.

I’m clearly skeptical, but also hopeful this might end up being halfway decent, so I showed my girlfriend the trailer to get her opinion. She liked Avengers and the Thor movies (largely because of Chris Hemsworth) but has no dog in the comic book movie fight. She never saw Man of Steel (which is a good thing, because the movie is terrible).

Her first words — “My jaw dropped.”

I was surprised — maybe this looks good after all! So I asked, “You’re excited to see it?”

She was, but for one reason — to see Batman kick Superman’s ass.

“It took me about half a second to be on Team Batman,” she said.

As cool as Batman looks here (He wears armor! He’s in an inexplicable fight in the desert!) there’s little about this trailer, through the apparent moralizing and positioning, that suggests Batman is going to win this fight.

It concerns me that Snyder and DC are so unaware of their completely unlikeable take on Superman that they’re setting up a downer of a movie.