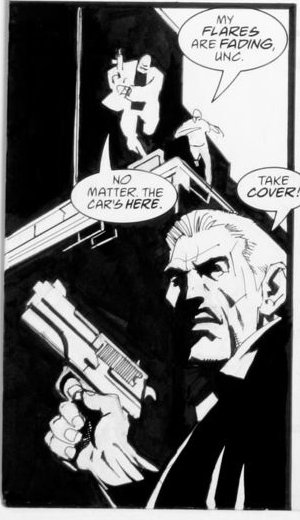 When I got to New York I realized people spent their lives doing two careers. Most people never made a major breakthrough. They would work; they’d have a life in theater, I didn’t want to be a career waiter. I saw a lot of people who’d get a day job in the office and slowly they’d never continue with their main desire. The day job would take over their time, the security would make them afraid to go out and look for work. Maybe I could balance two things? Comics being contract labor, theater being intermittent.

Right now I’m doing more theater than anything else. I’m running the Haymarket Theatre [in Lincoln, NE] and the Flatwater Shakespeare festival here in Lincoln.

Any comics you still read?

I occasionally just pick up a graphic novel that I particularly like. I’m still fond of lots of the Marvel comics. Daredevil is one of my favorites. I’ve never drawn it, I used to edit it. I’ve somehow always liked the character. He seems to inhabit the New York I always knew. The theater district is very close to Hell’s Kitchen.

Avengers I read just because I drew those characters for Marvel. I would either end up doing some runs on the Avengers or I’d draw characters who were part of the Avengers. I try to keep track of what’s happening. Some of the comics in the store, the art just blows me away.

Do you read “Criminal” by Ed Brubaker and Sean Phillips?

It’s one of my favorites. It’s more of the graphic novel category, it’s absolutely one of my favorites. I’ve always liked Phillips’ work, and he’s really found his niche with this stuff. I’d love to talk to Brubaker…he’s doing some of the best noir work, it’s the work I wish I could be doing but haven’t been able to find it except doing it on my own.

A lot of your crime stuff seems heavily influenced by film noir. Any movies in particular? What were your influences?

There were fewer movies. A lot of the style goes back to some of the old 1940s movies, the plots. My favorite movie of all time is the “The Third Man,” and Orson Welles’ work overall, he didn’t direct “The Third Man,” but the angles, people appearing out of the dark.

Just as much, “The Spirit” by Will Eisner, in a slight way.

With some of your art it looks like you’re drawing in white and using black as the negative space.

It was dependent on the tool, I’ve never been able to do it the same way since. At the time I was living in England, and there was a white-out pen that you could draw with very easily. You can do things with American white out pens [but] I’ve never found one you could draw with. This was just kind of fun to use. I would do that, a lo of it was working in and out. I’d have the pencils, Xerox, cover it in black and bring out the line again with white.

But some of your Marvel/DC stuff is more conventional or traditional.

The Joker story…I’ve never really been satisfied with that. I wanted to do something different from the very heavy noir story. 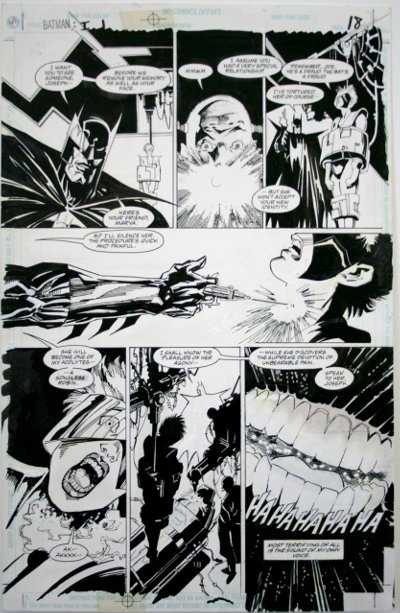 You couldn’t get it out of your mind, but I had to stop looking at it. Anything at that time being done in black and white was being compared to it.

Some of the white-out was just taking out things, playing white against white and letting your eye just finish the line. One of the things about doing black and white, particularly then, before computer coloring, you don’t need the same kind of holding line that you did with four color printing process. [I thought] “You know, I can do that, nobody’s gonna color this!” We know your eye is going to finish it, you can let black fade into white. How things white-out, the edges start to blur.

What’s different about working for Marvel/DC vs. the independent stuff?

The big thing was that there wasn’t as many rules. A lot of stuff at Marvel, especially someone like me, I did a lot of one or two or three-issue runs for Marvel. Now it would be an independent story arc, then it was a filler issue to get back on time and they would want to keep the look of what was going on. Now they think the different takes artists have is good. Back then, everything was John Romita. You’d see your work reprinted with a lot of corrections. Even Jack Kirby doing the New Gods they’d have someone come in and redraw his Superman faces. Some artists that came along in the later ’80s and ’90s and didn’t feel that much pressure. In the ’70s they were worried about keeping the house style. I kind of was trying to keep it within those bounds. Stepping outside the superhero genre was freeing, I could make this look any way I want to. I had short of gone my own direction with “Shadowman” series. But “Armed and Dangerous” let me take it all the way I wanted to.

I started at Acclaim as a writer. I picked the most noir superhero script I could find at Acclaim, it was also the most odd. Then I started drawing it, also. It also affected the way I drew that I was also writing it, a back and forth process with myself, that didn’t happen in the old days.

Why’d you pick these pieces for this show? 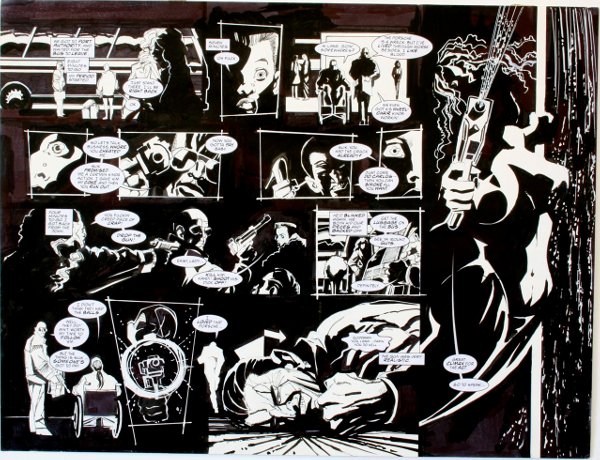 Valiant went down, the comic industry crashed while I was doing “Armed and Dangerous” as a series in the later half of the ’90s. It had been a big collector’s market, the bubble just burst. The decline was precipitous. Valiant’s sales started to go way down. I was pleased that the last issue was published at all, since it ended the whole series, it was a very limited run.. Occasionally I xerox the series and send it off to people who say they loved the series and didn’t know how it ended.

I did some Batman stuff after that, but that was sort of the end of it for me in terms of it being regular for the business. Most people my age who were active in the ’90s are not active in it now. Part of the urge was to change it. There is apparently some work out there and I would love to see this out there, it’s not a niche market anymore.

There still aren’t a lot of books that sell they way they did in the ’80s and ’90s. Movies have really helped the companies, but they’ll spike a book. Now people don’t even know where to find comics. They’ll buy it for one month, then [sales] goes back to what it was. It’s not quite the same business.

Do you see any commonalities across these different media you work in?

Sure…not thematically, but craft-wise…my ability to write dialogue. I think I write very good dialogue. I’ve also written plays. Both businesses are about storytelling. I’ve learned a lot about both from each other. I can tell a pretty clear story in an interesting, I hope multi-layered way.