The messiah is crucified

Posted in news, reviews by Doominator 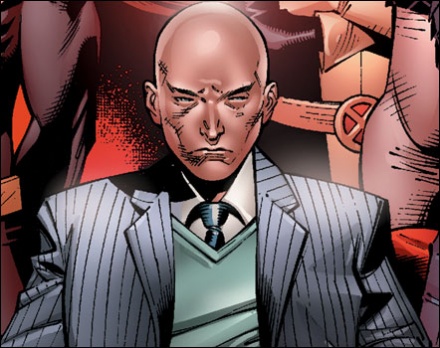 We here at Doomkopf have little regard for spoilers. You’re not going to a comic blog to get pussyfooted, are you? No, you’re here for the love of the game. And I’m about to talk about “Messiah Complex,” specifically the end of “Messiah Complex.” So I’m going to tell you the end of it, and you shouldn’t read if you don’t want to know what happened.

Because Charles Xavier is dead. Shot through the head by Lucas Bishop. And … hell yeah! I’ve been waiting for this moment for years. We keep seeing a recurring theme of the X-Men without Xavier. Go back to the sixties series … “Xavier” (actually Changeling) dies and the X-Men don’t know what to do. A while later, he’s badly wounded and leaves Earth and we see Magneto in charge and the X-Men split off and go to Australia. Then, of course, the Onslaught thing left him a federal prisoner for a while, etc., etc. Most recently Cyclops told him to fuck off, which was of course the classiest parting of ways for the X-Men.

But Xavier’s dream is over and the X-Men are breaking up … because he’s seemingly dead. Seemingly, because the teaser for the “X-Men Legacy” book says his mind is shattered by a bullet. Of course, they’ll reorganize, and Cyclops will be the new dreamer. But for right now, Messiah Complex has permanently altered the world of the X-Men.

Let’s let him stay dead. It’s not because he’s boring, or because we hate him. It’s just that I’ve been dreaming of this moment since I was a teen … to see what would happen to the dream if the dreamer were dead, if there were no hope of his return. We saw a body. We saw a bullet to the face. The only thing not accounted for here is Bishop, the duplicitous bastard. Cyclops blasted him through a wall, but we’ve got to keep in mind that Bishop absorbs and redirects energy.

There are still some loose threads. The previews at the end of the book seem to show that all the X-Books will be tackling that … and seem to indicate that I’ll resume reading “Cable,” something that’s been on and off again. I’m excited to see the future of the child … and I have some suspicions that I’ll get to in another post. But for now, consider me completely pleased by “Messiah Complex,” which got me excited about what the X-Men could become after Marvel all-but erased the last good go-round (Grant Morrison.) To paraphrase Lester Bangs, let us now praise famous death dwarves … or mutants, in this case!

4 Responses to The messiah is crucified